This is a popular Marvel slot machine that you can play at Playtech casinos.  You can play the Fantastic Four slot machine for free or you can make a deposit and play for real money. 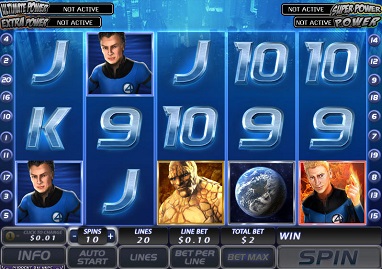 At most Playtech casinos you can play between 1 to 20 pay lines at once at a cost of $0.01 to $50 per line.  So the absolute minimum wager is $0.01 and the maximum bet is $1000 per spin.  The pay outs are good and during a long playing session you can expect to see many small wins, a decent amount of medium sized pay outs and a number of bonus features being activated.
Overall, this is a slot machine that most players should enjoy and be able to play.  All of the bonus features can be triggered during the twelve free spins you get for getting three or more scatters on the reels.  The pay out percentage is fair and you can use your bonus to play this slot machine.

If you have three or more scatter symbols on the reels during the regular game then you will win 12 free bonus spins.  During the bonus spins, heroes will be stacked on the third reel and you can activate one of four bonus features.  The bonus features will be activated if reel three is stacked with one of the four super heroes.
If Mr. Fantastic is stacked on reel three, then you will receive four extra free spins and Mr. Fantastic will become an expanding wild.  He can be substituted for any symbol except the wild symbol and the scatter symbol.
When the Invisible Woman is across the entire third reel you will activate the Invisible Woman feature.  Once activated you will get four free spins and if the Invisible woman shows up at least once during a spin, then the multiplier will be added by one.  At the end of the feature you will have the total of your winnings during your four free spins multiplied by the multiplier.
The Human Torch feature will be activated if three Human Torches are on reel number three.  During this feature you will have four free spins where the Human Torch will occupy the entire first reel.  During this feature the other three super heroes will not be on the other four reels, while the Human Torch be land on the reels more often.
Get three Things on the third reel during the 12 free spins and you will activate the Thing special feature.  During this feature you will get three extra spins where the Thing is wild and can be substituted for all symbols except the wild and scatter symbol.  Whenever a Thing lands on the reels during the feature, the Thing symbol will freeze and remain in place for the rest of the spins.