Most people haven't even heard of Red Dog never mind know how to play Red Dog. You can play this fun game at most of the Internet casinos, but most casinos will only let you work off your welcome bonus at a discounted rate. The house edge for a regular game of Red Dog is 3.2%. Using a bonus while playing can decrease the house edge by 0.5% to 2.7% depending on where you are playing.

Playing Red Dog with a bonus online can reduce the house edge by 0.4%. That creates a theoretical pay out ratio of 97.2% which translates to a 6.25% reduction to the house edge. Playing here you can wager $35.71 a hand and average a loss of $1 per hand of Red Dog played. For every dollar that you wager you can expect to lose approximately 2.8 cents.

Skill Level Needed: Nil
Aces: high
Type of game: Playing cards
House Edge: Depends on how you play, odds in general are bad.
What to look for: Nothing in particular.

To predict whether or not the third card will be higher than the lowest card, and lower than the highest card.

How to play Red Dog Online

To begin playing you will need to select how much you want to play for and then deal out the cards.  A card on the left and right will be dealt face up and there will be a empty space in the middle, where the third card will be placed.  At this point you will have the option to double your bet by raising or just call your bet.  No matter which one you choose, you will still be able to play out your hand.  If you think the middle card will be higher than the lowest card, but lower than the highest card, than you should raise your bet.  If you think that the middle card won't be in that range, than you should just call.
There are a few things that can greatly increase the chances of you coming out ahead in this game.  You must remember that the pay out for a spread of four cards is the same as the pay out for a eleven card spread.  With that in mind there are a few rules you should abide by.  Avoid raising your bet when if the spread is less than five.  Raising your bet on six card spread should be avoided, but is not considered a must.  Also you should always raise your bet if the spread is seven or more.

Red Dog is a game of chance, but using some strategy can greatly increase the chance of you coming out ahead.  To increase the probability of winning at Red Dog, you should only raise when the spread is at least seven, otherwise always stand pat. 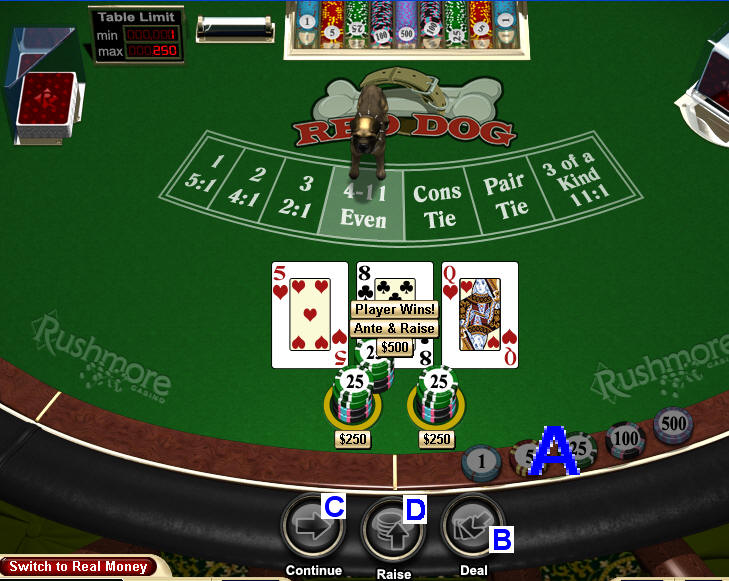