How to Play Tequila Poker

The game of Tequila Poker is quite unique and a lot more entertaining than I thought it would be.  There are two types of games you can play and the best part is you do not have to commit until after you have seen your hand.  High Tequila is a casino game where you try to make a high point total and Tequila Poker is a casino game where you try to make the best poker hand.  Both are easy to play and have a $60,000 max pay out.  Minimum and maximum wagers is $1 and $300 per hand.  Both games use a 52 card deck with no wild cards.
To begin playing you will place a wager and press deal.  You will then be dealt four cards face up.  You will now have to choose to fold, play High Tequila or Tequila Poker.  If you fold then you will lose your ante, if you play either of the two game then you will be placing an additional wager equal to your original ante.  Two more cards will be added for you to use in your hands after selecting which game to play.  Read about the two games below, to find out which casino game would be better to play.
High Tequila will use the top five cards out of your four up cards and the two cards yet to come, the lowest card will be discarded.  If you make a winning High Tequila hand, then you will be paid out 1:1 on your ante and be paid out according to the pay out table below on your bet.  In this game face cards are worth ten points, Aces are worth 11 points and number cards are worth there numerical value.  The best possible point total is 54 points, which would be four Aces and a face card.  This will pay you out 200:1 on your bet.  The minimum point total needed to win is 46 points.
If you have elected to play Tequila Poker, then you will be making the best five card poker hand out of the six playing cards.  Here you will need to make a pair of Aces or better to get paid.  Just like High Tequila you will be paid 1:1 on your ante and paid according to the pay out table on your bet.
If you don't make a winning hand you will lose both your ante and your bet in which ever game you play.  Which game to play or to even play at all, will depend completely on the type of poker cards you get.  A hand with a small three of a kind would work better at Tequila Poker, but trip Aces would be better for High Tequila if it has a decent kicker.  One thing you should keep in mind is if you are lucky enough to get quad Aces, don't play Tequila Poker.  Quads are only worth 15:1 and if one of the two cards ends up being a face card, you will end up getting paid out 200:1.  There is approximately a 55% chance that this will happen, and the pay out is over 13 times more.  It might be hard to give up a large guarantee pay out, but the odds should make it worth the risk. 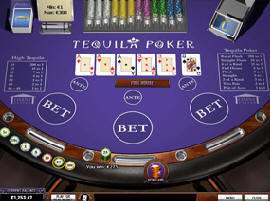