Ten's or Better is very similar to Jacks or Better video poker.  The game play is the same, there is no wild cards in either game and the $20,000 grand prize can both be won by hitting a Royal Flush.  The main differences is that you will get paid if you get a pair of tens or better instead of jacks, the pay outs for a 4 of a kind, full house and flush are slightly lower here.  In the end, the small compromise could be well worth for those of us who prefer more frequent wins versus slightly larger pay outs for the bigger hands.
If you are used to playing Jacks or Better, you might want to adjust your game play while playing Tens or Better.  Being able to get paid on a pair of tens alters the probabilities vs reward ratio for the entire pay table.  Going for straights, flushes and royal flushes can be more worth while now, because of the added advantage of having an extra card that you can pair up.  Being able to pair up tens, gives you three more outs when trying to make a winning poker hand with a high straight draw or a flush draw with a ten card in it.
Most of the time Ten's or Better can be played for $0.05 to $25 per hand.  You have the option of playing a single hand at a time or up to fifty-two simultaneous hands at once.

Tens or Better Pay Out Table

* Pay table based on a 5 credit bet

Where to play Tens or Better Online

The best online casino to play Tens or Better video poker is at the Bet Online Casino.  Not only will you be playing on a video poker machine with a small house edge, but you will also be able to work off your $1,000 Bet Online Casino bonus on it.  The house edge can vary greatly depending on the pay out table. 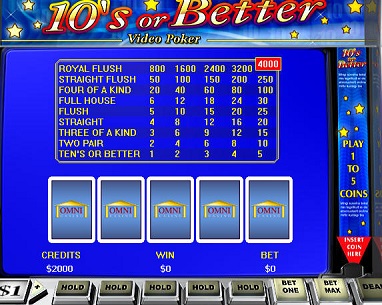